Church Hill is proud to showcase Modern Living in Old and Historic Homes.

Eleven generous neighbors have joined the CHA Holiday tour for 2022, opening their homes to tour guests. As a BONUS, two of the homes are opening their vacation rentals, on the rear of their property. The dwellings originally supported the main house, and served as a detached kitchen in one, and a carriage house in the other, Modern living at its best!

The Old Dominion Model A Ford Club
will showcase meticulously restored Ford automobiles from 1928 to 1931. On North 24th street at Patrick Henry Park, across from the Fire Station

Grace Street Overlook,
with its view of downtown, and Shockoe Valley including a marker displaying a photo of the same view taken in 1862

The Viewshed at N 29th and Libby Terrace,
the place where Richmond was named, with QR code narration on your smartphone of the history of the spot

Chimborazo Round House:
Interior will be open for the first time in the 56 year history of the tour, and trolley ride in Chimborazo Park, with its spectacular views of Fulton and Southside Richmond

David and Jessica Jordan will again lead their group

of period costumed carolers to each home.
RVA Trolleys will take tour goers to stops in warm comfort

in their trademark classic vintage trolleys

Purchase Tickets
Become a Sponsor of the Holiday Weekend! 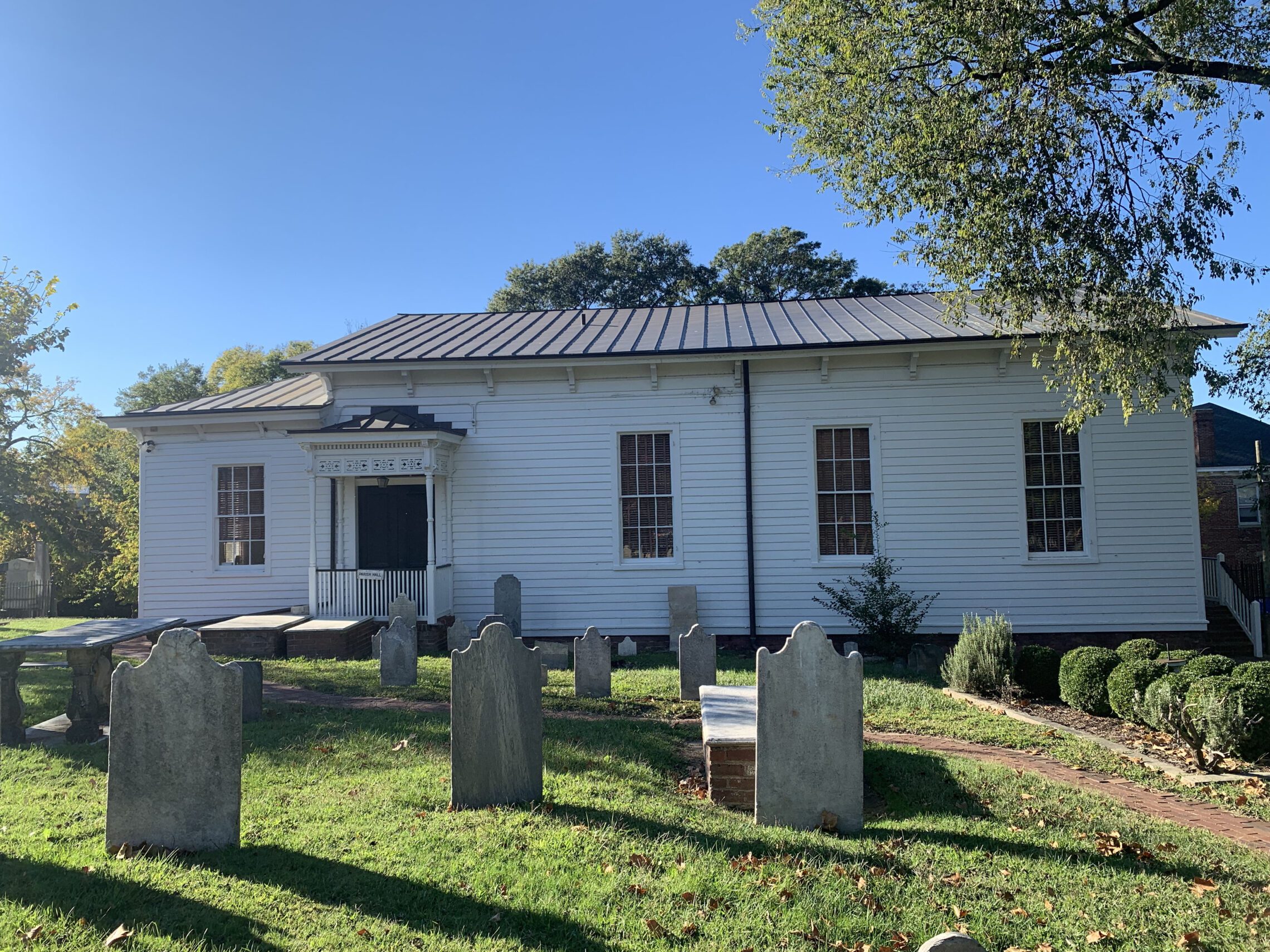 Up the steps and to the right of Historic St. John’s Episcopal Church. The building used as the Parish Hall was built in 1876 as a Sunday school. The meticulously restored parish house serves a museum with photos and artifacts of the church and the church’s graveyard. It is the first stop on the tour. Pick up online purchased will-call tickets, or purchase tickets on the day of the tour. The tour stops can be visited in any order, and trolleys service all tour destinations. Bathrooms available at the parish house.

A photograph, posted at the overlook, dated 1862, depicts Shockoe Valley from this site, the highest point in Richmond. Seen in the 1862 photo and visible today is: The Adam-Craig House, dating from 1784, is seen from the overlook, to the right. The Monumental Church on East Broad, near VCU Health, built after the disastrous theatre fire of 1811 is clearly visible on the photo and from the overlook, and the Governor’s Mansion, straight ahead, dating from 1813, is as it appeared in 1862. 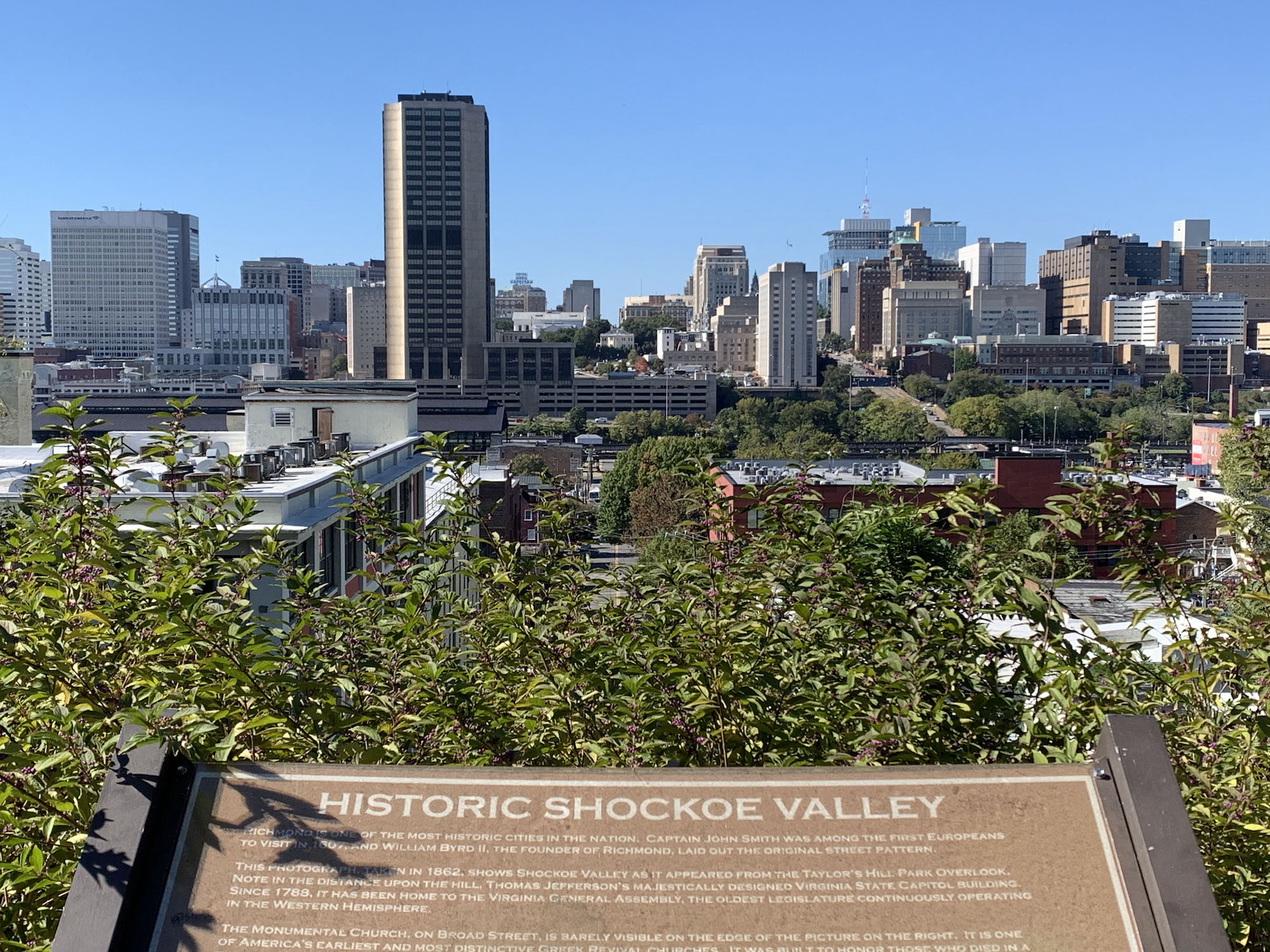 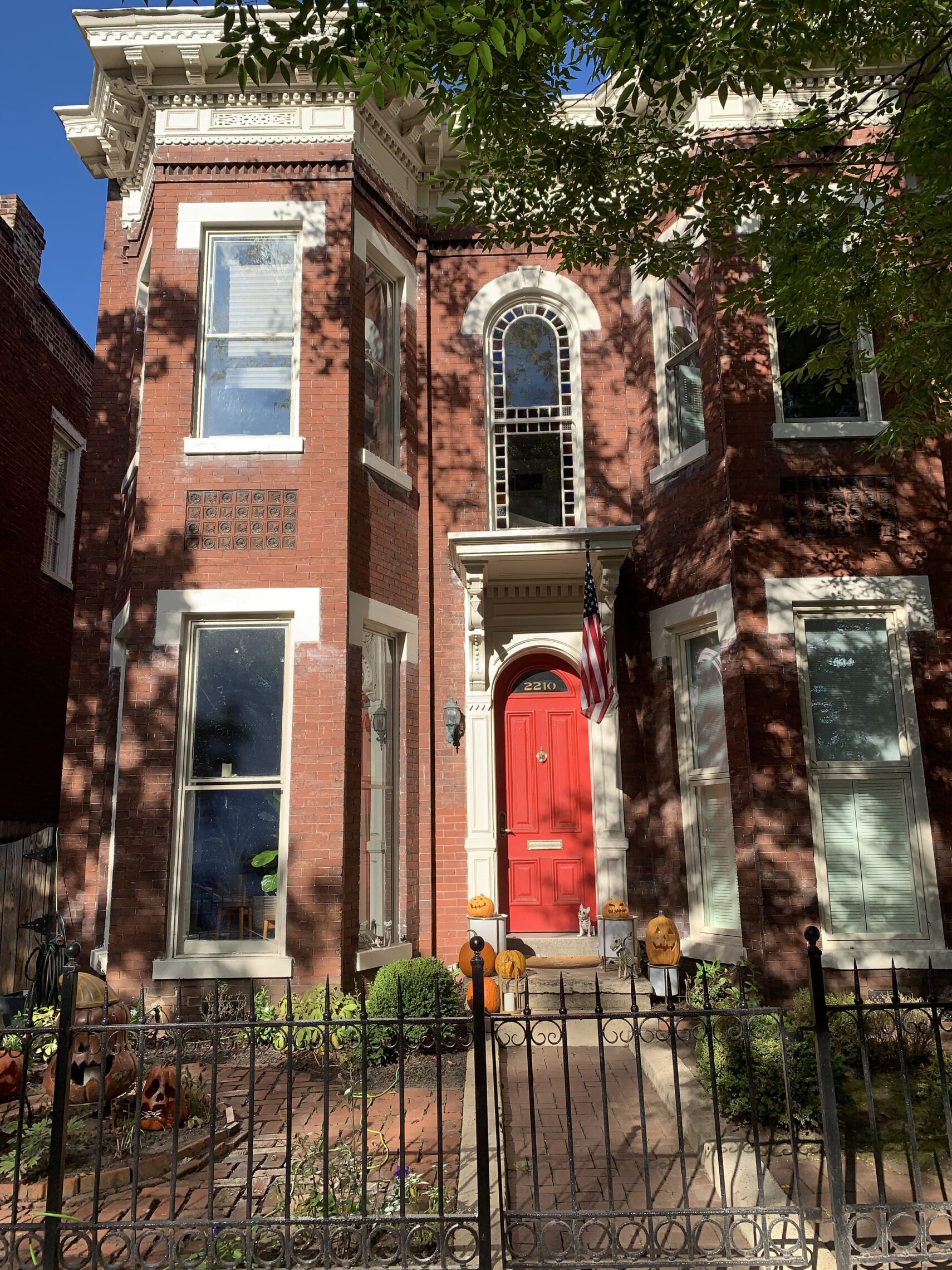 This dwellings and its attached home were built in 1887. As with most houses of this era it was built as an investment rental property. This unique pair of houses exhibit characteristics of both Italianate and Queen Anne style architecture and represent the transition between styles that occurred in the 1880s. The arched Queen Anne window with stained-glass panes centered over the hooded front entry is a dramatic feature. The three-sided projecting bay with crossetted-stone lintels, cast terra cotta panels, and molded brick below the cornice is exceptional.

Double-houses have been popular throughout Richmond’s history, especially in urban areas where they were often investment properties. The houses at 2204 and 2206 East Grace Street are fine examples of this trend in the Italianate-style. This pair of houses were built ca. 1878 by Charles W. Hardwicke. In partnership with James Netherwood and John Mann, Hardwicke built many houses in the neighborhood from the 1800s to the 1900s. This two-story brick double house displays many characteristic elements of the Italianate-style including the segmented-arches over the doors and windows, the delicate sawn work on the porch and the deep bracketed cornice. 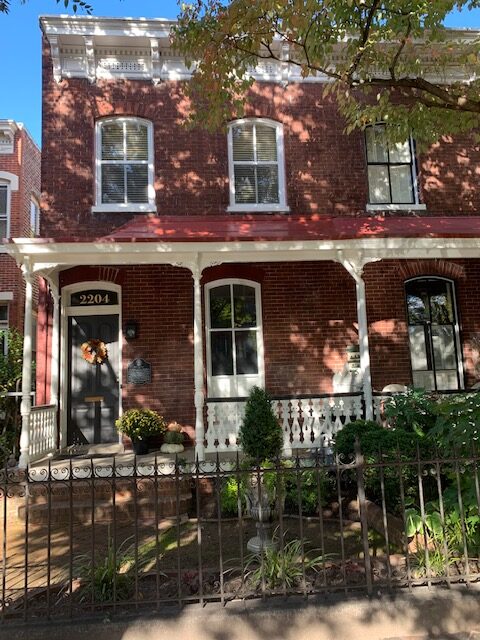 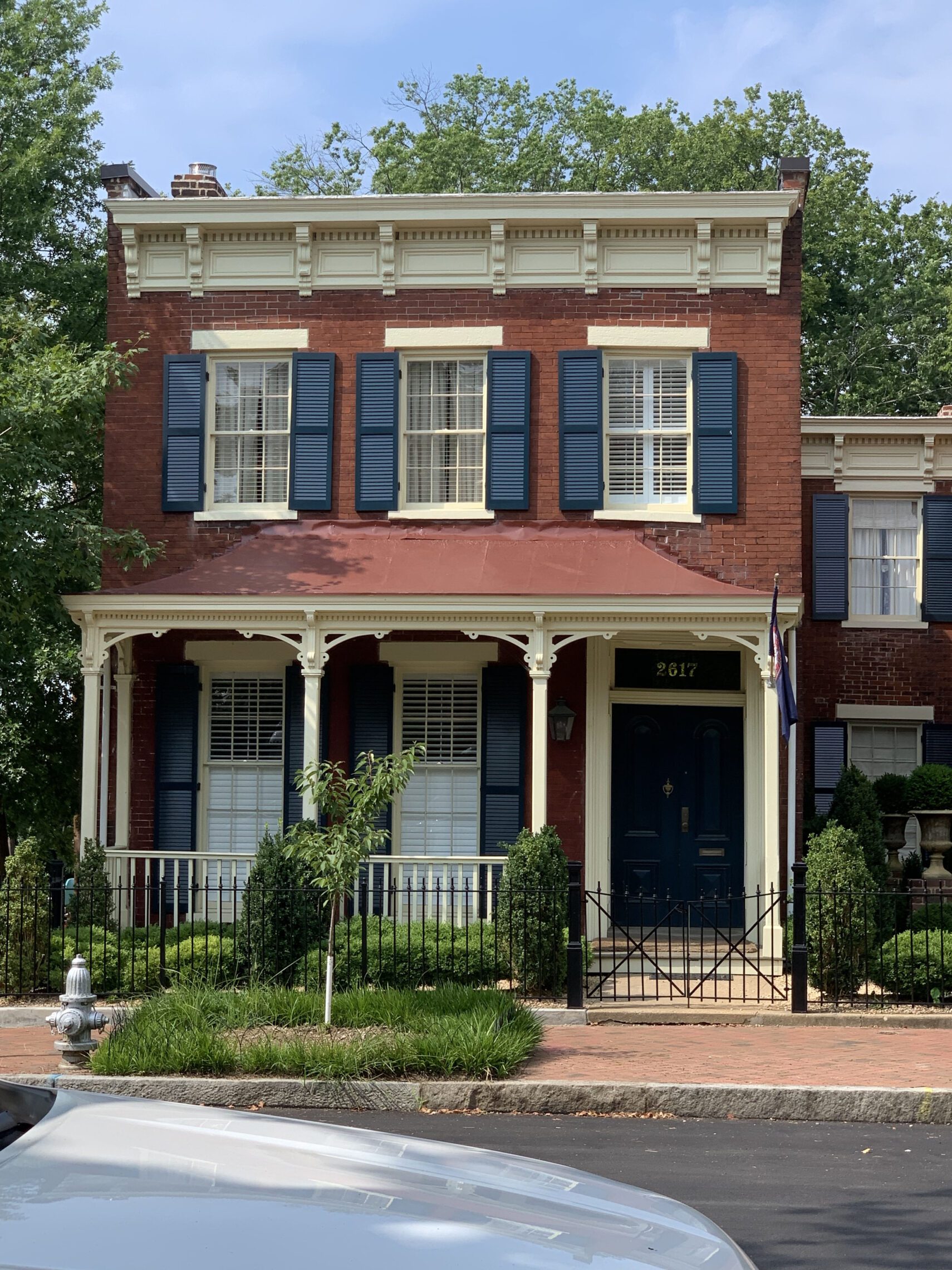 This two-story brick dwelling in the Italianate style was built in 1874. It displays elements of the Greek Revival-style with its plain sills and lintels and simple door surround. It also shows off the use of mass produced architectural elements in its delicately detailed porch and deep, bracketed cornice. The home underwent meticulous restoration, beginning in 2017. This is the first time this home has been open for the Church Hill Holiday Tour.

This home is a textbook example of Greek revival architecture. It is a symmetrical two story dwelling over an English basement. The two story structure at the back of the house was considered a kitchen/help quarters. It was attached to the main house in the 20th century. Currently it is a one room, two story kitchen with modern appliances. The ceiling is lined with the old floorboards from original flooring from 1855. The main house is a personal residence. The English basement is a fully furnished vacation rental unit. The decor is a mix of modern, antiques and art. 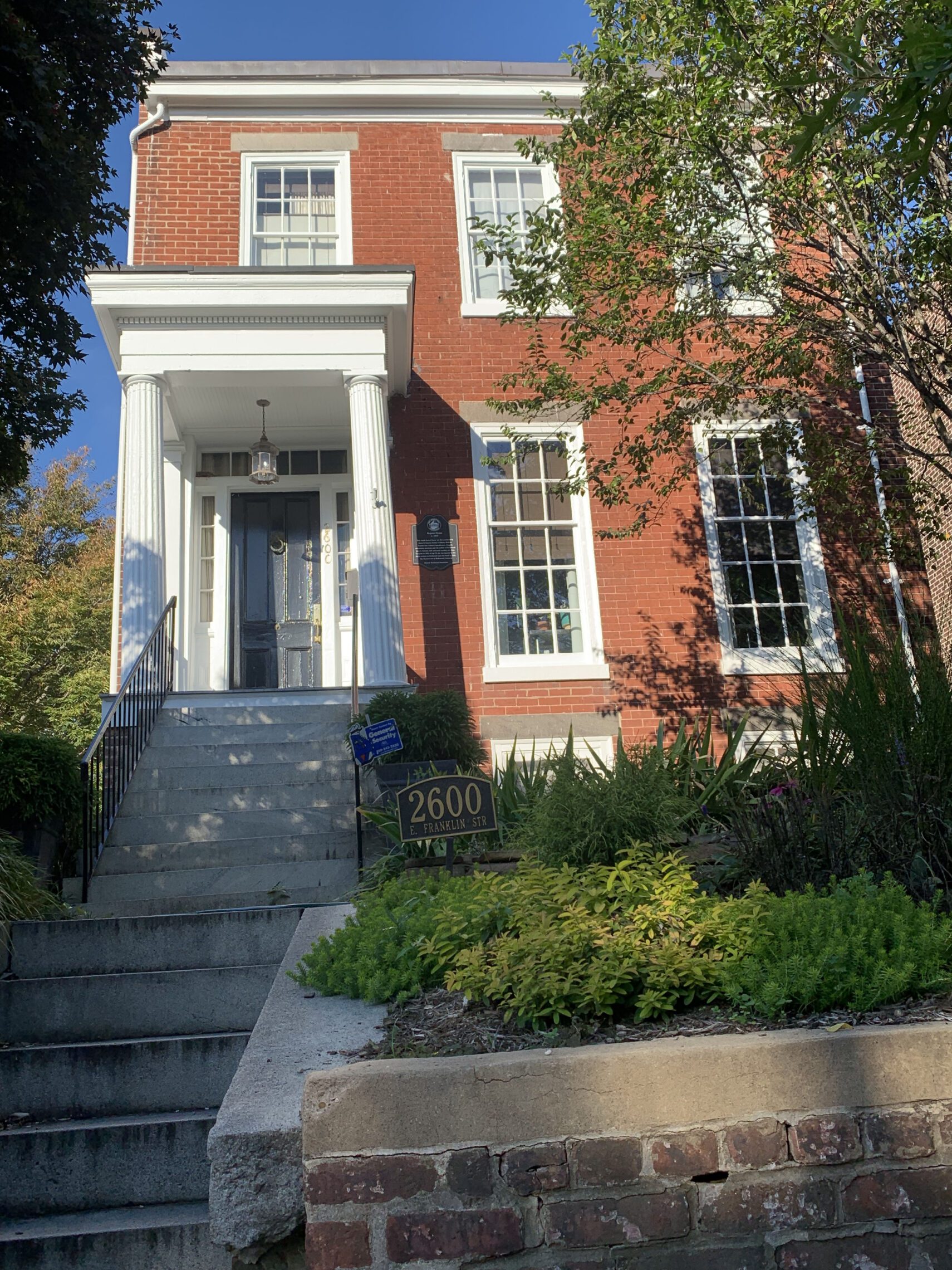 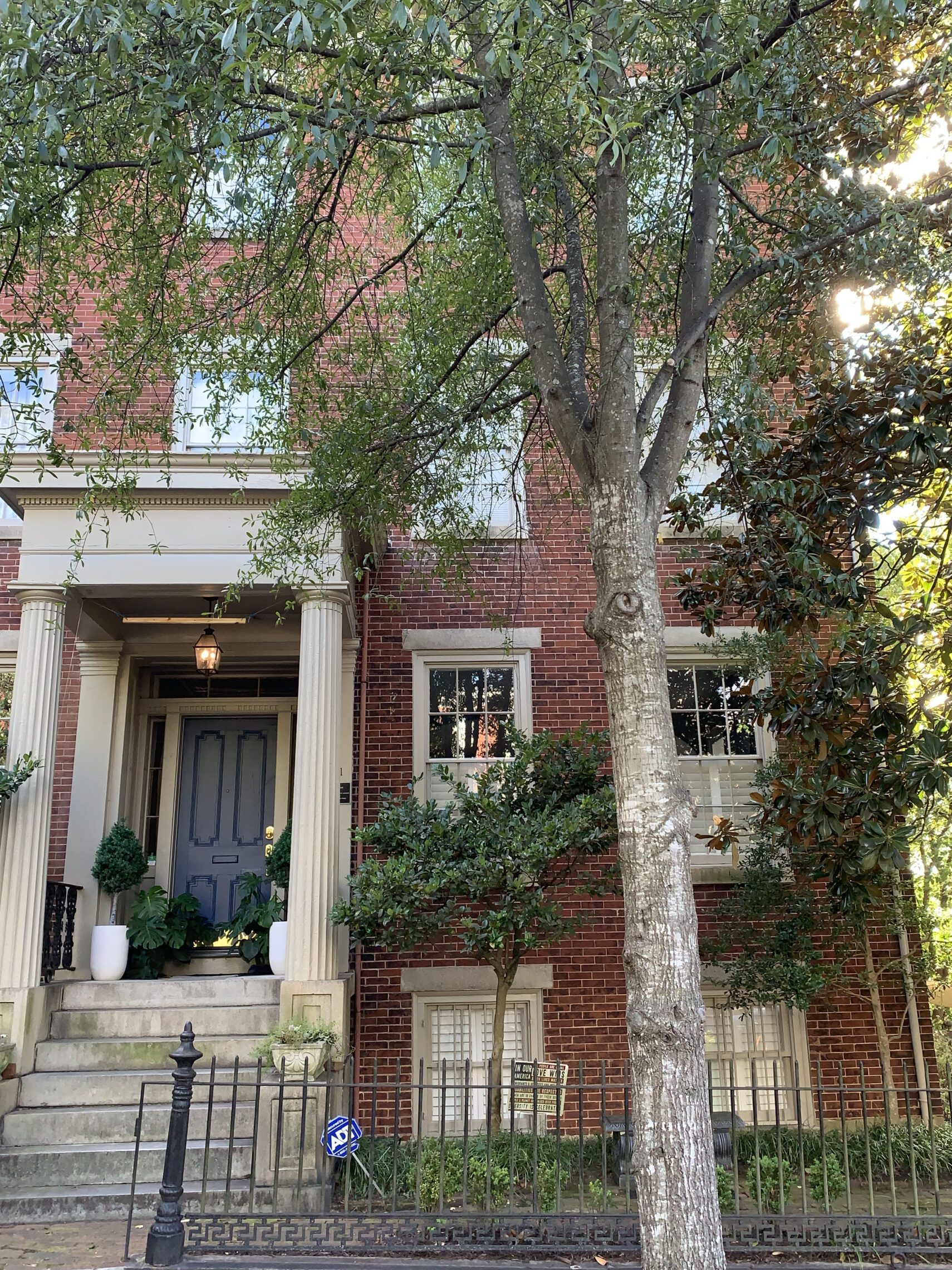 The south side of the 2600 block of East Franklin Street is a textbook study of Greek revival architecture at its finest in the City of Richmond. This house was built by 1861 by John Ligon, a tobacconist. A cupola, on the top floor adds drama and light to the home. The house features two-story verandas on the south elevation with commanding views of the James River.

This is one of five of houses that were moved to Church Hill by Historic Richmond Foundation, in the 1960s and 70s to save them from being demolished by the construction of the Downtown Expressway. This house was built in 1856 and originally stood at 217 South Third Street. Charles Campbell, the original owner, was the superintendent of the Tredegar Iron Works which explains the beautiful cast iron porch and window lintels. The three-story dwelling over an English basement displays many characteristics of the Greek Revival style including the stepped gables, plain box cornice, and the symmetrical ranking of the windows as they rise up the façade. The house also features two story rear porticoes. 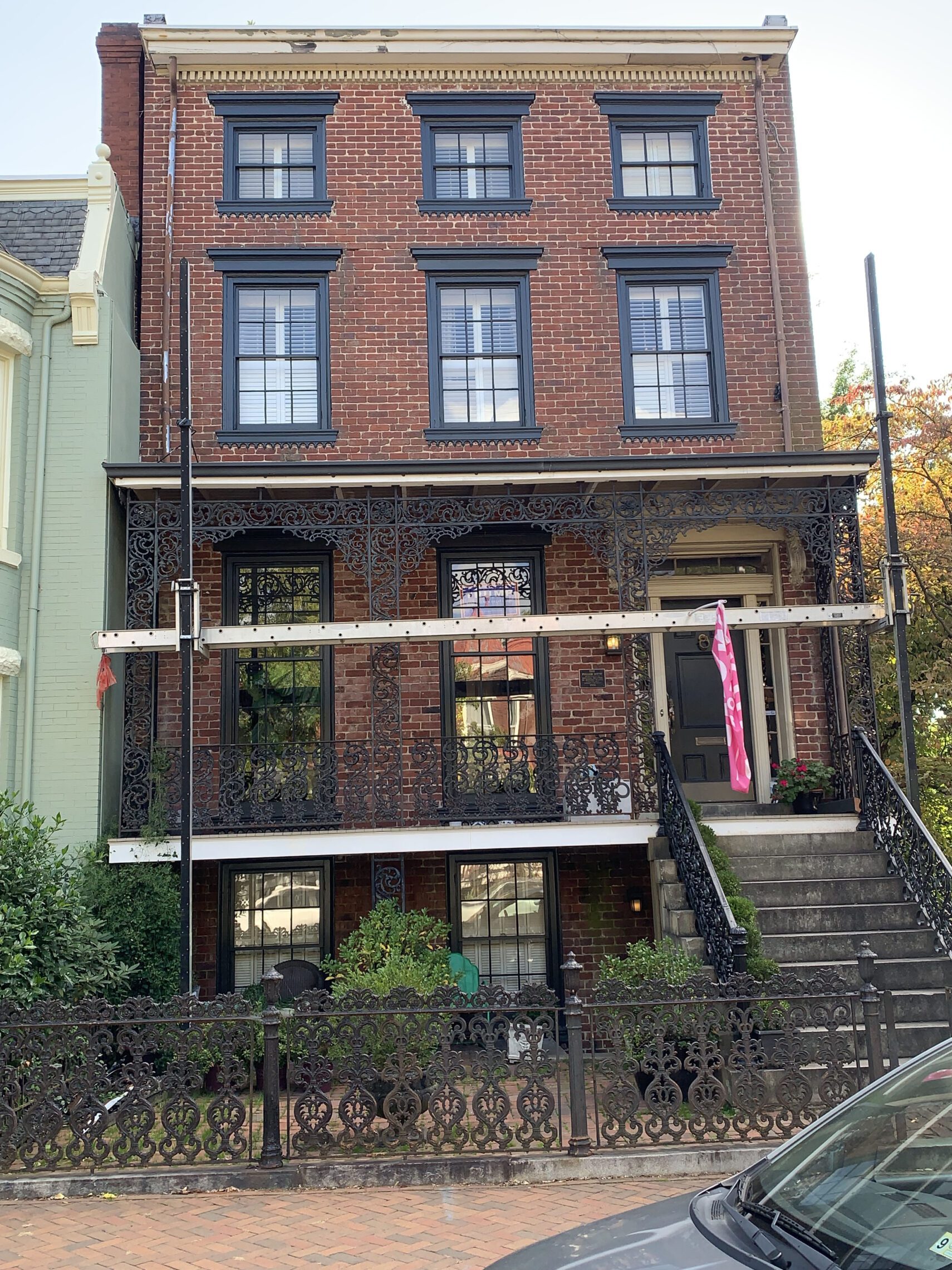 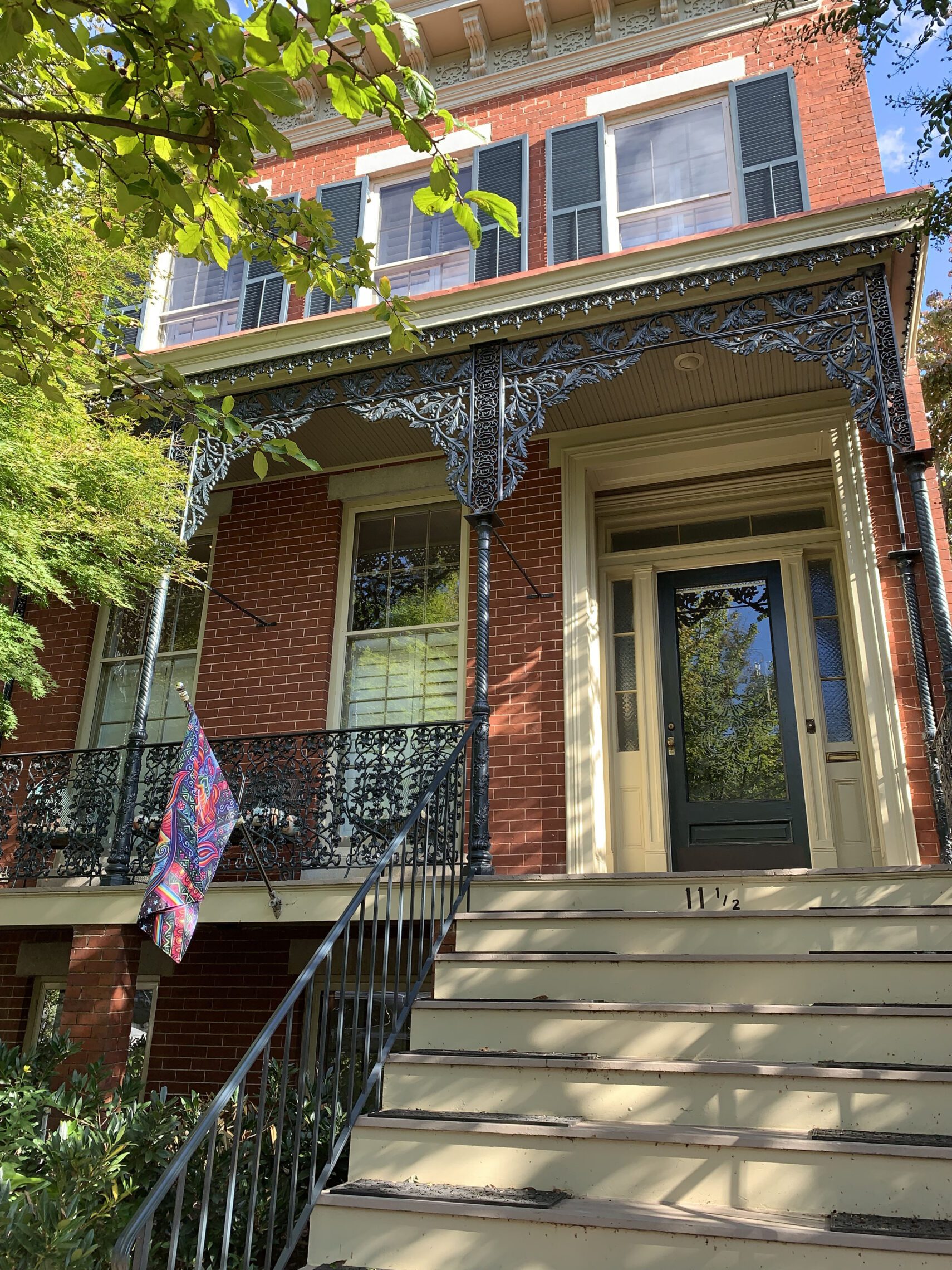 In 1868, William T. Hancock, tobacco-products manufacturer, built this impressive Greek revival brick dwelling. The most magnificent feature of the house is its cast iron porch. The oak leaf and acorn pattern was among the most popular in Richmond. In about 1980, the house was abandoned. By 1989, the house had fallen into disrepair due to neglect. Previous owners collected musical instruments, including nineteen grand pianos, which remained in the unoccupied house. The house was condemned by the City of Richmond. Historic Richmond Foundation intervened and stabilized the house to prevent it from deteriorating further. In 1990, using new General Assembly legislation, the city transferred the house to the William Byrd Branch of the APVA (Preservation VA) with easements held by the Virginia Department of Historic Resources. The house was meticulously restored by Nancy and Hunter Sledd in 1991.

The view of the James River from this spot is the same view experienced by indigenous people before 1750 and by English settlers who established the city of Richmond, and all those who preceded them.

We, today can enjoy the same view thanks to tireless advocates and smart urban planning. Historic preservation and urban development can co-exist successfully. Open the QR code posted at the site to learn how this victory was accomplished and see that this view will remain into the future. A port-a-john is available at Libby Hill Park. 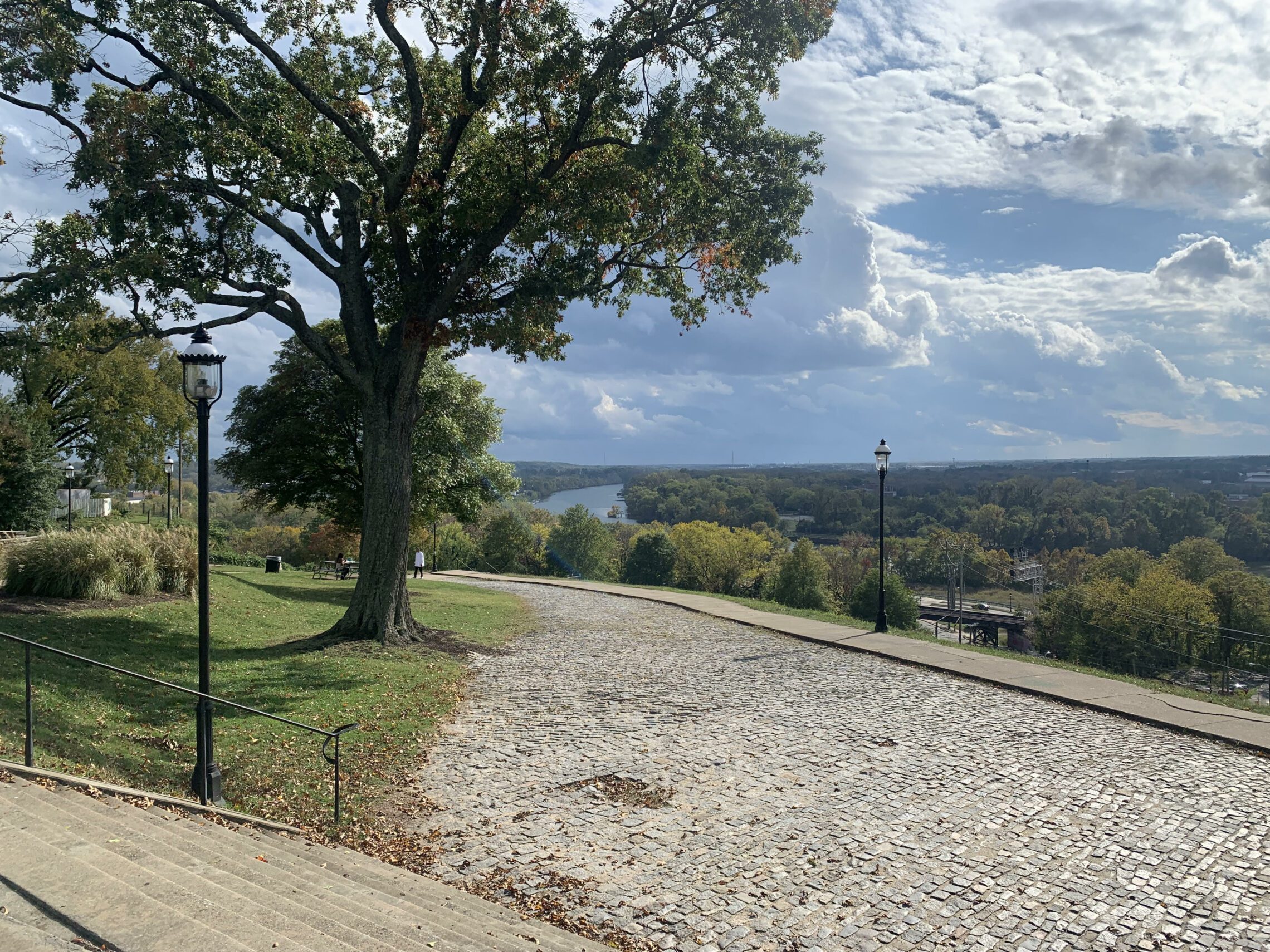 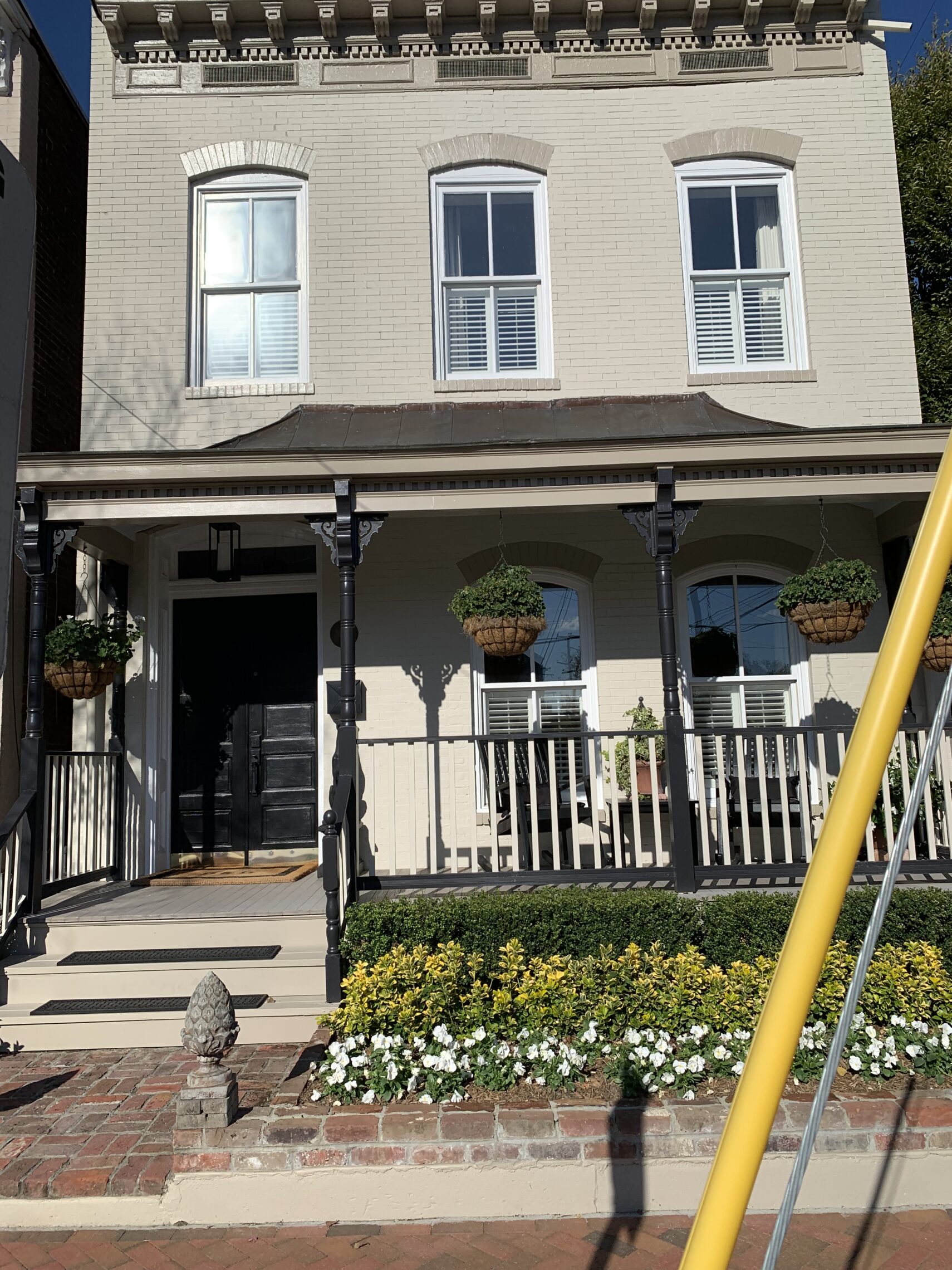 Built in ca. 1890 by a tobacconist and recently renovated in 2022 to accommodate contemporary living, this house displays the characteristics of a transition between Federal, Italianate, and Victorian styles.

The original pine floors still exist in the entry hall, upstairs hall, and two of the 3 upstairs bedrooms. The house is eclectically furnished to include a 19th century Louis Philippe armoire, contemporary EJ Victor console table/lounge chairs, vintage Mitchell Gold club chair, and various works of art like the oversized photography in the living room by Harold Davis, blown glass in the den by Dale Chihuly, and sculpture in the piano room by Florida artist Kim Eifrid.

3310 E Broad Street turned 120 years old this year! Completed in 1902 by Albin Netherwood, a stone cutter and quarryman, Mr. Netherwood utilized the same stone used in the iconic Old City Hall and the Masonic Temple on Broad Street. He also constructed many handsome buildings in the city including Byrd and Main Street Railroad stations, All Saints Church, Grace Street Baptist Church and the Dooley Mansion at Maymont. Like its neighbor at 3422 this house has an eclectic blend of architectural styles, which includes slender Doric columns and a centered gambrel pediment. Another resident of note L.C.

Harrison was an accomplished set designer for numerous Broadway shows, films, and TV including ABC’s Twin Peaks. He hand painted faux marble and stone treatments on several mantels on the ground floor.

He also founded a black alternative cultural center and gallery that got its start in the first floor of 3310 E. Broad. 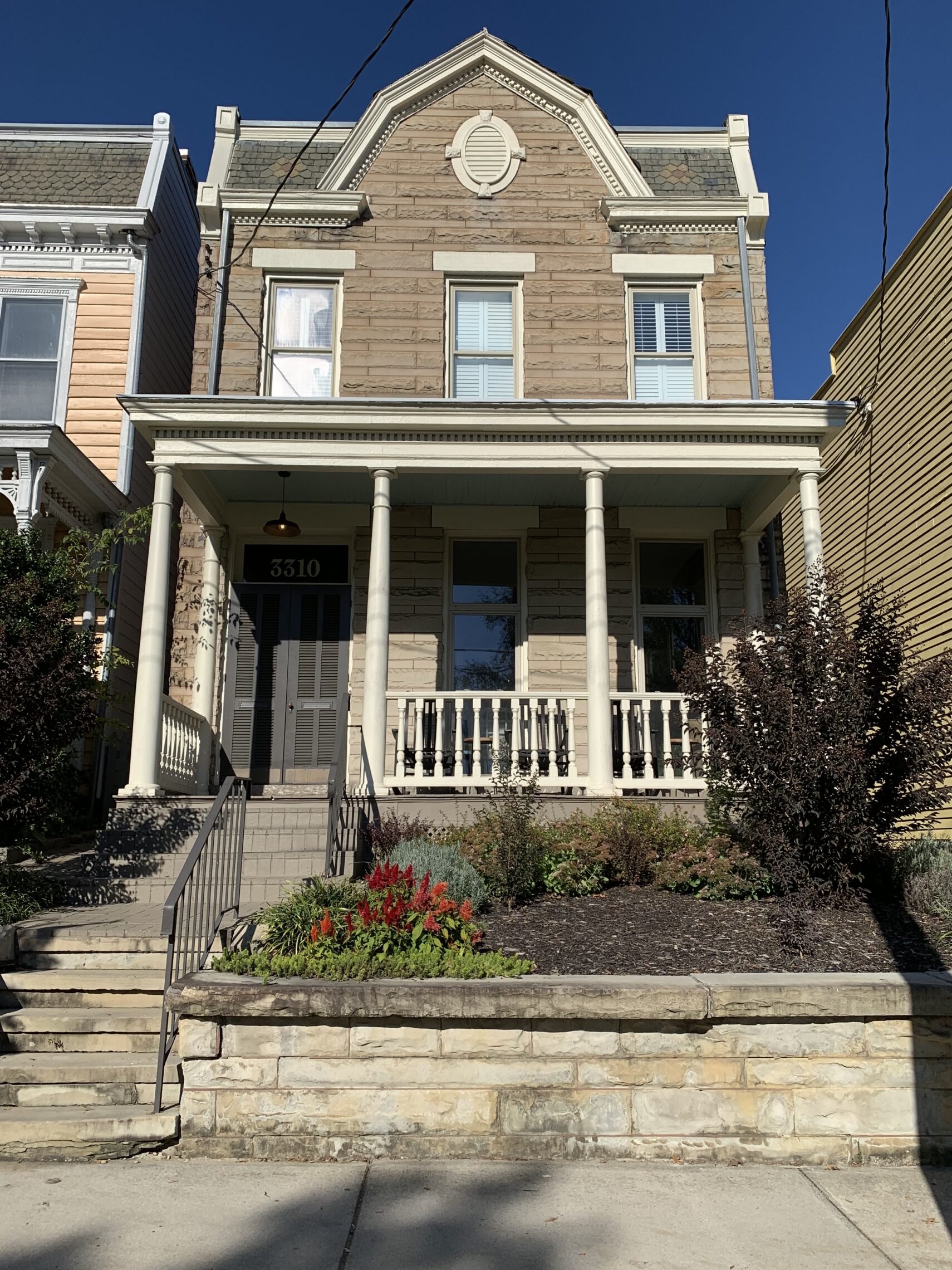 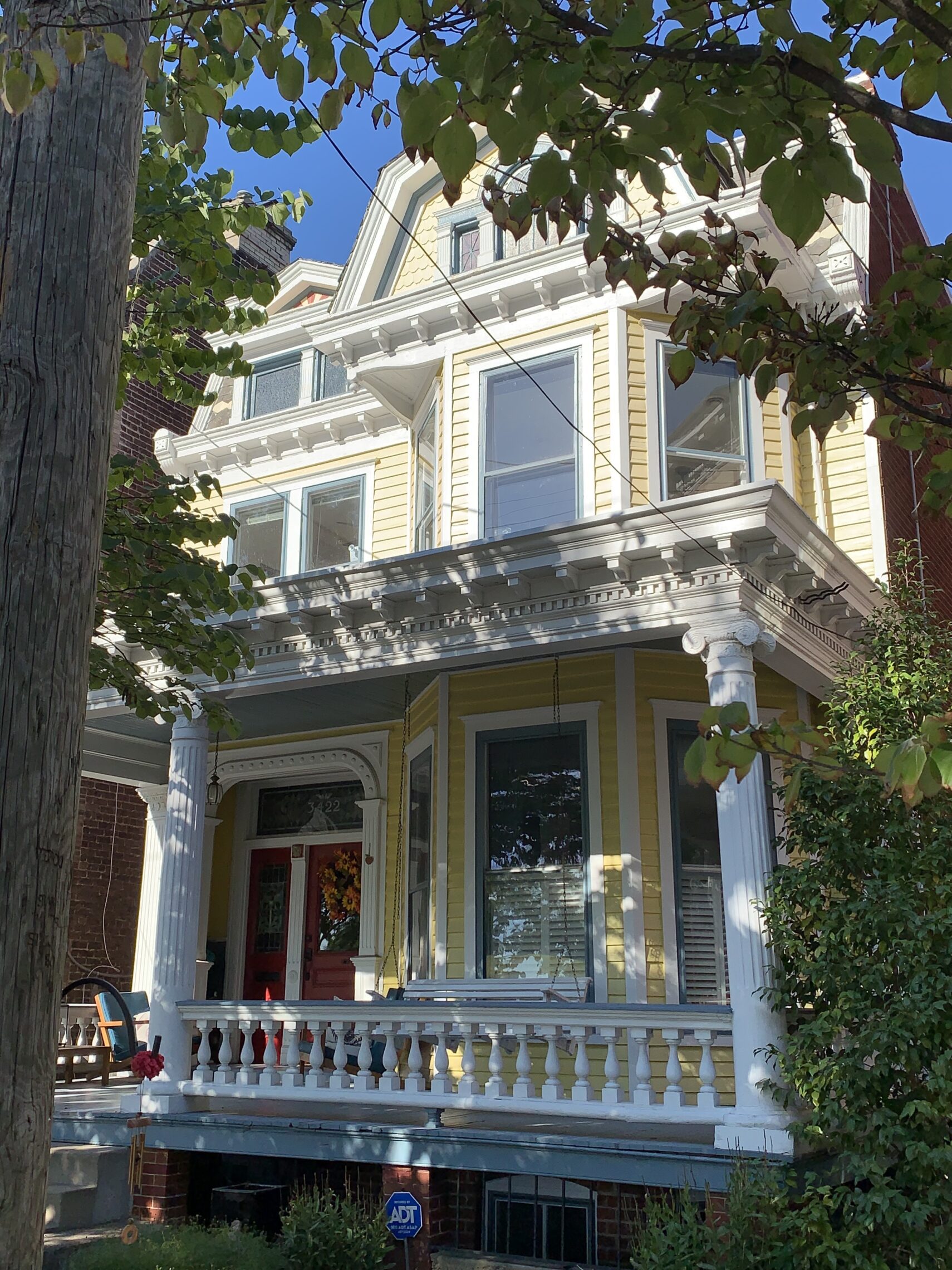 Architecturally, this 2 1⁄2 story frame dwelling is a wonderful example of the eclectic blending of revival styles that occurred in the first decades of the twentieth century. The Ionic columned porch is a nod to the Classical Revival, the projecting bay and mansard roof are reminiscent of the Victorian era, and the gambrel roof over the bay with its Palladian window are examples of the Colonial Revival. The interior boasts wood details, refinished to their original appearance.

Because of its early date, ca 1840, it was very difficult to discover any details about this Greek Revival double house. Double houses were a common building form in the early to mid-nineteenth century and were almost always built as rental houses. Very Few people owned their homes until the early to mid twentieth century. This house is in an area of Church Hill north known as Shed Town that was inhabited by numerous carpenters and brick masons. The massive center chimney is shared by the adjoining house. The delicate cornice is a nod to the growing influence of the Italianate style. The front porch with its turned columns and delicate brackets is likely a later addition. See the historic plaque on the porch to learn this home’s relation to Edgar Allan Poe. 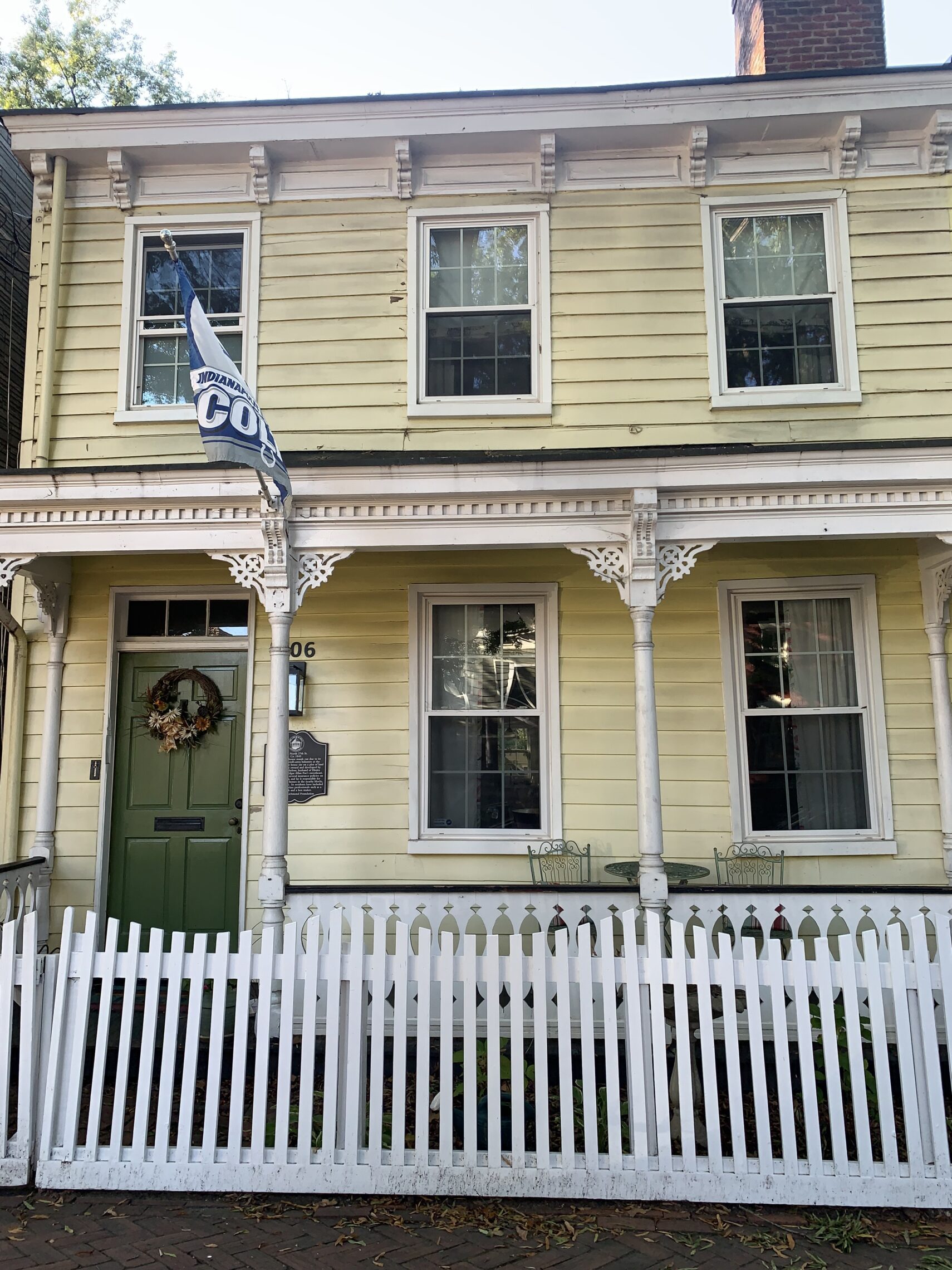 The Church Hill Association of Richmond, Virginia is a non-profit 501(c)(3) organization of civic-minded neighbors working together for the betterment of our community. All members are volunteers, and anyone can join.

Copyright 2022 | Maintained by the residents and volunteers of Church Hill.